Arts organizations across the nation spend about 2.3x more on traditional marketing channels like print and radio than on digital advertising, more than any other industry. Digital advertising has become an extremely sophisticated platform to directly target patrons who already have an interest in what you do – but the arts are rapidly falling behind in this space.

Last week, I attended a very informative workshop presented by Google and Capacity Interactive (CI), hosted by The Arts Community Alliance (TACA), about two new studies providing analysis of successful methods of digital marketing, comparisons across sectors, case studies, and new strategies that could take your arts organization to the next level.

Are You Using Data?

According to a study performed by CI, the greatest concern among organizations of all sizes is the ability to analyze and harness data to implement a more informed digital strategy. Sadly, this may hinder strategic thinking on multiple levels.

In a recent whitepaper, The Truth About Entertainment published by McCann Truth Central, it was found that 93% of people in the United States claim that entertainment is vital to their happiness in life, but 44% say they rarely feel entertained. This whitepaper breaks down multiple factors that may be contributing to this phenomenon, like the rise of loneliness and accessibility to live entertainment, including cost for younger generations, physical mobility, and location.

As a result, casual fans make up a majority of the patron base. These are patrons who would likely be inclined to attend arts and theater events more frequently but don’t due to cost, accessibility, and/or awareness. Interestingly, these fans also spend nearly a week longer in the purchase consideration phase, about 31 days on average according to a Google study. Additionally, compared to frequent fans, casual fans consume far more content online and this doesn’t seem to be limited to just younger generations.

A common perception is that those aged 65 and older don’t consume news through online sources; however, according to a recent study by CI and WolfBrown, online consumption rates are fairly consistent across all age groups. The least likely to find news and events online are those aged 75 and older, but even this age group reported 83% of their news is sourced online and 93% is sourced through print media. 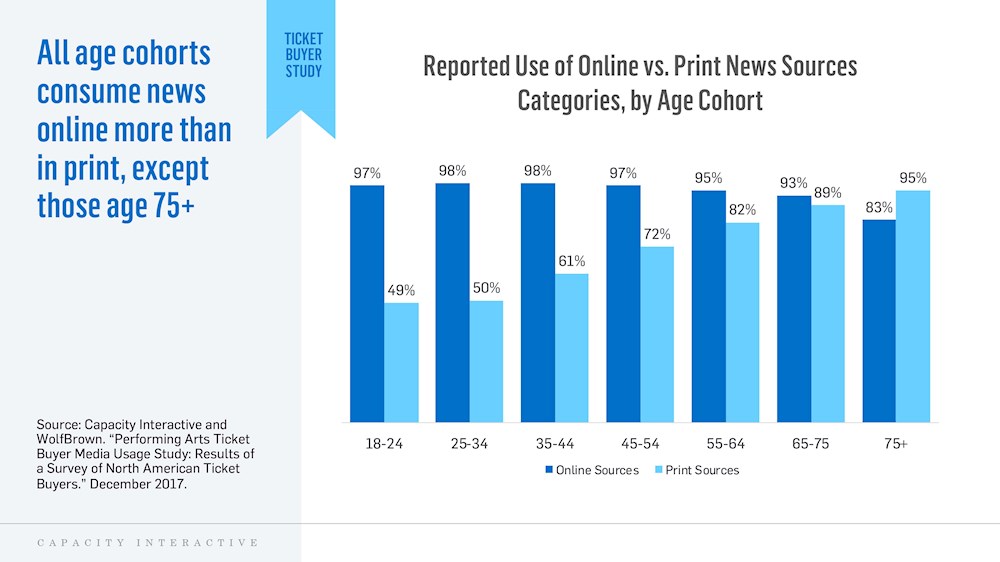 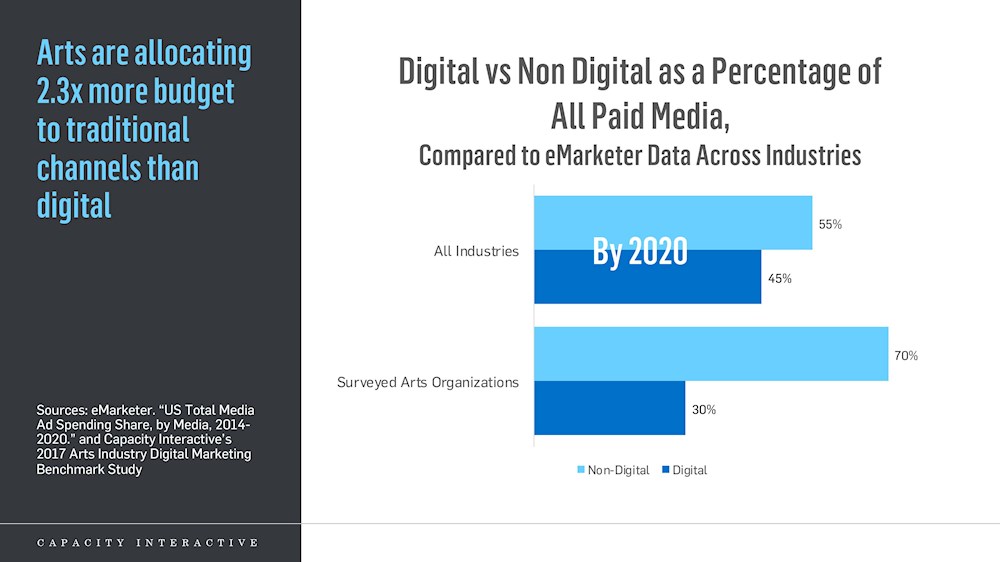 As younger generations make up an increasing percentage of primary arts patrons, the trajectory of digital usage suggests that online presence and strategic digital marketing will become absolutely essential. In three case studies performed by CI, organizations implemented a marketing strategy that was 100% digital only - incorporating email strategy, content customization, video production, website optimization, digital paid media, and data analysis. All three participants ended their campaigns by exceeding their goals, with the largest leap being a 14% increase in overall ticket revenue.

Key factors in these outcomes are understanding your audience and leveraging data to develop effective campaigns. Sectors outside of the arts are embracing strategies built on a foundation of shared data that provides a holistic view of patron behavior.

Eliminating silos is critical to expanding the use of data and analytics.

In a 2017 joint study by Google and Econsultancy, leading marketers (defined as those whose results significantly exceeded their business goals) were 50% more likely to have a clear understanding of customer journeys across channels and devices, and twice as likely to routinely take action based on analytical insights. Tellingly, 86% of all respondents in the Google/Econsultancy study said eliminating silos is critical to expanding the use of data and analytics in decision-making. As summarized in an MIT Sloan Management Review report, five key ingredients were identified as fostering this approach: executive buy-in, data-savvy marketers, cross-functional collaboration, a learning culture, and an investment in technology. (p.23)

As arts organizations begin to think about adopting a new approach to marketing strategy that will better meet the demands of today’s digital-led world, it’s important to note that advertising based on patron behavior across multiple platforms is a major factor in reaching your audience and guiding them to purchase rather than limiting campaigns to any particular platform.

Elevation is matching dollar for dollar spent on web design, copywriting, marketing, and other graphic design work. Nonprofit organizations in the U.S. or international are eligible.

A major component of developing digital advertising strategies that engage with patrons in effective ways is the creation of compelling content that is adaptable to all platforms.

Arts organizations are consistently dealing with limitations in staff, budget and resources, and many other hurdles, in trying to keep up with larger companies in other sectors. Across all sizes of arts organizations, the biggest struggle in developing creative and content is that staff are spread too thin, according to CI’s 2017 Arts Industry Marketing Benchmark Study.

Making a case to hire dedicated positions to create content is often hampered by a lack of leadership support, budget restrictions, and other needs that can, unfortunately, appear more dire.

However, an increase in the number of employees does not necessarily equal and increase in productivity, in marketing or in any other department. Along with adding to the number of employees dedicated to content creation, it's important to also improve and maintain employee motivation and productivity. As technology and techniques evolve rapidly, you'll need a workforce that can keep up with the demands. Create an environment in which employees feel inspired and empowered to learn more about their respective fields. General Assembly recently published An Infrastructure for Lifelong Learning whitepaper that includes 7 methods on how to achieve this. 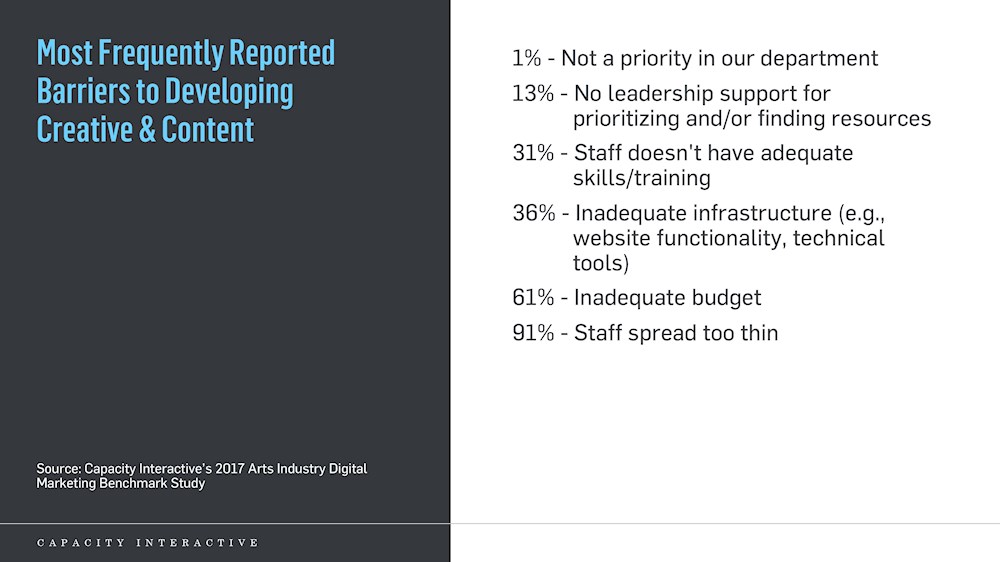 According to Google’s Digital Path to Ticket Purchase Research, video content is a leading method for reaching your audience in the most engaging, memorable, and effective ways. A reported 56% of arts and theater ticket purchasers who watched videos related to the event said it helped them get excited about attending. Additionally, engaging digital creative was found to have a 47% impact on the purchase decision.

Understandably, not all arts organizations are able to allocate dollars towards video creation on a regular basis. However, you may already have an extremely valuable method just waiting to be tapped into.

Email is reportedly the leading source for upcoming events across all ages. Leverage your email marketing strategy to provide anticipated and relevant information to those who actually want to receive it. 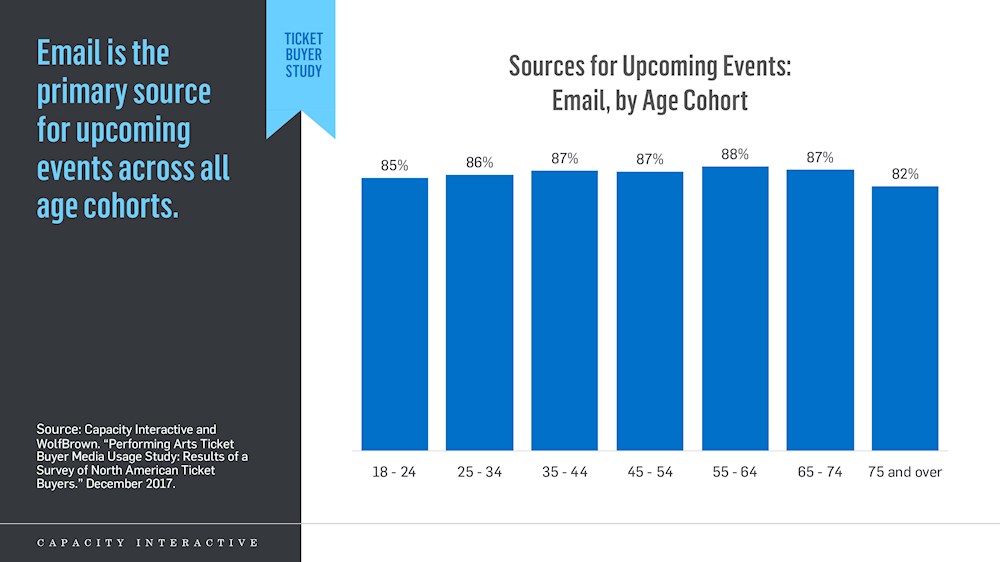 Understanding the interests and behavior of your audience is simple with the right tools. You may already be using an email management software system that tracks behavior for each campaign. By taking some time to review and/or experiment with A/B testing, you can use that data to help inform improvements to your content and your communication schedule accordingly.

Are You Reducing Friction?

According to a HubSpot study, what your patrons say about you is 13x more important than what you say about yourself. That means that every sour interaction a patron has with your organization, online or in person, could be costing you future supporters. These individuals, who are already in your database, are the most valuable assets you have in spreading positive peer-to-peer influence, so it’s important to ensure that they are happy.

The Flywheel effect is a concept that was developed in Jim Collins’ book, Good to Great, and addresses the ever-evolving processes of patron acquisition and retention in today’s world where success is dependent on everything working together cohesively. 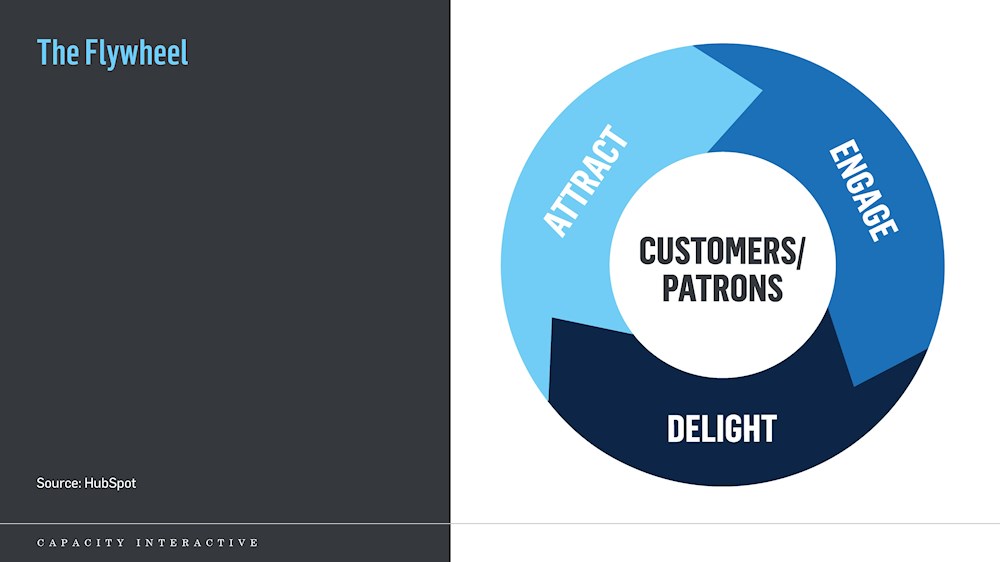 This concept identifies attracting, engaging, and delighting your patrons as the three essential ingredients to developing a strong patron base and stresses that “there is no single defining action” to success, but rather, “the process resembles relentlessly pushing a giant, heavy flywheel, turn upon turn, building momentum until a point of breakthrough, and beyond.”

Re-evaluate marketing strategies to best meet long-term goals. Direct media buys and large campaign days, like Giving Tuesday, can be expensive and result in inconsistent and/or little reward. Look at your data to see if the amount allocated toward various channels of advertising is working to your benefit and prepare strategies that will improve your digital presence.

3. Is our current marketing strategy working to meet our goals?

4. Are we allocating enough dollars to digital marketing for long-term success?

Create a learning environment at the workplace to promote cross-departmental collaboration, creativity, and engaging content.

2. Does our staff have a healthy line of communication between all departments?

3. Where are the weak points in communication?

4. How can we improve collaboration?

Ensure positive experiences across all digital platforms as well as personal interactions. Your greatest asset is patrons who have already expressed interest in what you do. What they say about you often means more than what you say about yourself.

2. Are there any hurdles in purchasing tickets or making donations online, over the phone, or in person?

3. Is each staff member, regardless of title, equipped with responding to patron concerns and questions in a positive manner?

4. What are current patrons saying about us?